January 28, 2010
Oh how I wanted to enjoy this!  I had visions of an alternative to The Message, but instead, what I got was something all together different.  This is a retelling of the New Testament by the Ecclesia Bible Society.  Yes, the original languages were used, scholars were consulted (I even studied under one of them!) but in the end, it is simply put a Post Modernism New Testament tract.  Something to give to non Christians that are unreceptive to The Gospel in its traditional form. 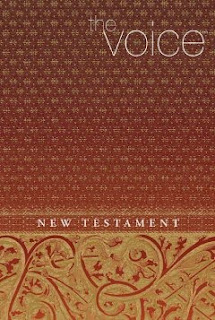 That being said, the writing is lovely, there is still the use of chapters and verses, book introductions, footnotes, and commentary. The commentary is well placed and easy to understand.  The Voice New Testament is intended to be read aloud and the "screenplay format" lends itself to readings with multiple speakers.  It is poetic and beautiful, but I would not foresee it taking the place of any of the traditional translations. I was also disappointed with the lack of a topical index.  With such a work that has intentions of spreading the good news to those that have not read the scripture, I would have expected one, even if it was brief.

Overall, it is a well written retelling of the scripture, but should not be purchased with the intention of the use for study or as a replacement Bible.