How did that happen?

February 23, 2010
I had all these grandeous plans to finish a bunch of projects and then start new ones without the guilt of leaving the old ones behind.  That did not last long at all.  I did two and half of the StallOut projects done and have been collecting wonderful fabric for the other two quilts (which is acceptable, right?) and have pretty much decided to ditch the other one I reported on, but now, I have a whole new set of things that I'm working on.  Would you like to see a picture??? 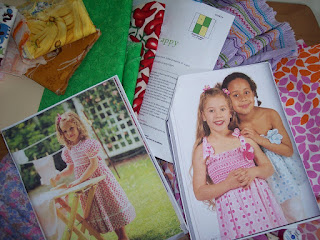 You see that? Smocking has taken over once again.  I didn't even put in my socks in the picture, and I have two on needles right now! I'm hoping to start with these two smocking projects and get them finished by the time Hannah is still able to wear them! Unlike that purple one on the top right which is in the StallOut category because I can't figure out what to do with it now that the smocking is done and it's no good for the original purpose.
I blame it all on Australian Smocking and Embroidery

!  They have the most beautiful projects, it's just really hard to say "NO I WILL NOT!"  I highly recommend it as well as Creative Needle which is no longer in print, but well worth the search to find past issues.