March 02, 2010
I need all the help I can get and I'm normally willing to take it from ANYONE, except when it comes to folding unmentionables, I don't want anyone seeing our drawrs.  It's just a thing I have.  Any way back to my bright idea, this one has to do with a potato, a corn cob holderthingy, a potato peeler, a grocery bag, a knife, cutting board, and willing child. 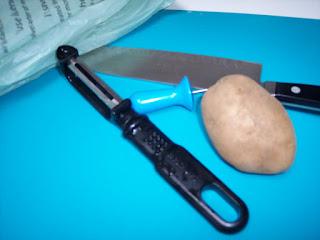 Do you have all those things?  I did and my idea kind of grew out of collecting some of them together and then collecting more of them as I saw fit, but it ended up with a really good method for letting small children help you peel potatoes. 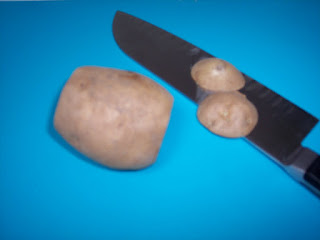 First, lob both ends off the potato with the knife. 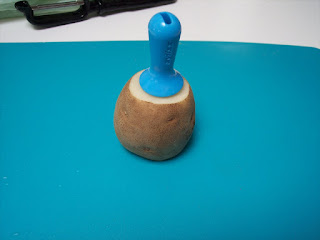 Second, stick the corncobthingy into one of the lobbed ends. (Isn't that a fun picture?) 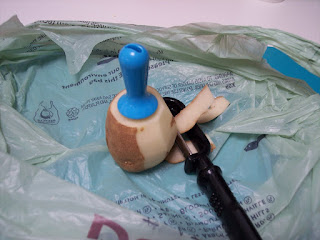 Third, place a plastic grocery bag on top of the cutting board and hand the potato to the willing child.
Third and half, Take the potato out of the child's dominant hand place it back in the non-dominant hand and help them hold it so that the potato is standing straight up.
Fourth, instruct the child to run the peeler down the side of the potato until all the skin is removed and hopefully in the grocery bag which can be tossed for easy clean up.

Isn't that brillant??  I might just use the method myself as it totally cuts down on accidental slicing with the potato peeler by 34%.

Now if you want to help the willing child to get some chopping practice in, quarter the potatoes and then then slice about half way through the quarter to give yourself cubes and then let them have at it with a butter knife to finish up the job.

Alright, that's my good deed and brilliant idea for the day.  I don't know how much longer I can keep coming up with things that are so amazing, but as long as I do, I promise I'll share them with you.  Who am I kidding, I'd share my ideas with you even if they were lousy :D