March 27, 2010
The 2010 March Daring Baker’s challenge was hosted by Jennifer of Chocolate Shavings. She chose Orange Tian as the challenge for this month, a dessert based on a recipe from Alain Ducasse’s Cooking School in Paris.


To this day, I'm still not exactly sure what a Tian is, Hannah called it an Orange Tan.  Either way, it was nummy! 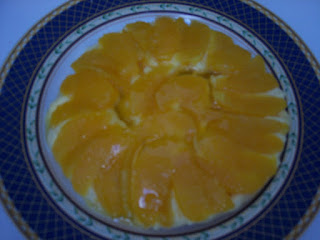 And it was gone! 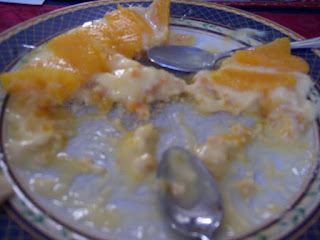 There were a ton of "steps" to this recipe, including segmenting your own oranges, making your own caramel, making your own marmalade, and baking a cookie.  To be honest, I am a little disappointed by the lack of baking involved in the past three challenges (which have included nainomo bar, tiramisu, and this tian).  At most baking appears to be an after thought.  But enough of my whining.  If you're still with me and you want to make this delightful dish, here's what you do.
Get some:
pecan sandies or some short bread cookies
mandarin oranges in juice
caramel sauce
whipped cream
orange marmalade
Now you can either make a huge one or a little one but the steps are the same either way.  If you're making little ones, you'll need probably a cupcake pan of some kind and a big one can be made in a cake pan or any kind of dish with sides that can go in the freezer.

I put a layer of parchment paper in to help it come out in the end but if you want to chance it by all means go ahead and charge ahead, if you don't have parchment, I think wax paper would do. Now the layering:
Toss the drained mandarin oranges in a little caramel sauce and then arrange them in the container
Mix a little marmalade with the cool whip and then put on top of the oranges, make sure it's a nice even layer
Spread some orange marmalade on the sandies and then place them in a single layer on top of the cool whip.

Now place the whole thing in the freezer for the cool whip to set up.  When your ready to serve, run a knife around the edge and plop onto a plate, drizzle with some more caramel.  Viola, MamaTina's Take on orange tan!