March 04, 2010
I am thankful that God is good! He has been using our Wednesday night program at church to talk to me about some things and then I've been using the rest of the week to figure out exactly what he means. I am especially thankful for the two words that he has spoken to me the past two weeks and I think it's no coincidence the order that they were given to me. The first is "enjoy" and the second is "forget." Let me tell you he has been ever so faithful in both those things and I am amazed at what he was shown me while I have prayed and meditated upon those two words!

And here's something else that I am thankful for 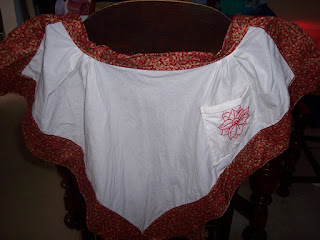 This is an apron that I started working on for Christmas 2006 and yesterday, it became a completed project!  WooHoo!  I used a pattern for the apron, but I improvised on the pocket by doing a red work poinsettia. 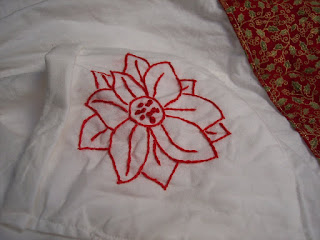 Isn't it cool to finish things that got started and just sat around for the longest time, wondering if they would ever get done?  Let me tell you what caused the StallOut on this project...It was a little bit of gathering in the waist line and I couldn't figure out how to do and get a straight seam.  Well yesterday when I picked it up and looked at the fact that the gathering was in very specific spots (via the pattern) and that I could easily sew up to those spots and then sew the gather after everything else was tacked down, it became quite simple.  I think it's going to be a lovely addition to our Christmas season.