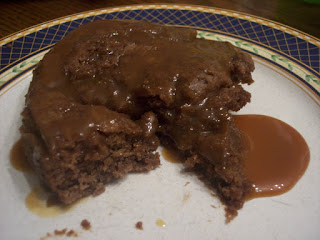 For our date night this past weekend, we tried our hand at steamed pudding.  I must say, people say that romance is supposed to be steamy and on fire, but I think we might be doing something wrong.  Though this dish was terribly delicious and easy.  I did not use suet.  It wasn't available.  It would not be opposed to using it, as I have used lard before and it's a similar type ingredient.

I got the recipe from King Arthur Flour's Baker's Companion cookbook and the nummy sauce was thanks to Sander's.  I have no short cut for this delicious dessert, but highly recommend that you try it out.  We did have one pretty big snag and that was the fact that my seal broke.  I liked it so much that we might be on the market for a pudding tin.