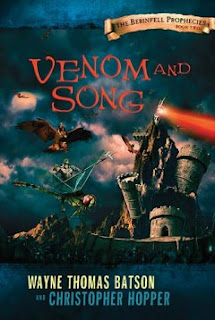 Venom and Song is the second book in the Berinfell Prophecy series. Having not read the first in the series, it was easy to pick up the story line and jump right into the action of the story itself. There is plenty of background information at the front of the book so that you do not have to wade through several chapters of back-story.
The story itself of seven elven lords is very captivating and reminiscent of Tolkien’s Lord of the Ring series. The main characters were in middle school when they were taken into their kingdom of Allyra; the writers do an excellent job of putting forth the struggles that occur during that awkward life stage.


Venom and Song has numerous Christian themes that are stated through out and put into understandable examples. The characters had numerous growing moments in the story and it was tangible the way that they were growing from childhood into adulthood and the responsibility of leading a people into freedom from slavery. With so many books out there for young people to choose from that teeter on the edge of dark arts, it is refreshing to read something from a Christian perspective that is easy to read and relates to young readers, but engaging enough for a quick read for adults. I highly recommend the series for a summer read!

Disclosure of Material Connection: I received this book free from Thomas Nelson Publishers as part of their BookSneeze.com