December 11, 2010
Sometimes, when I come to blogger on Saturday and see the lack of new posts in my blog feed, I feel like I've come into the office on a day off.  Why is that?  I guess some of the blogs that I read are professional, even if they are in reference to something that most of us don't get paid for (homemaking).  Maybe it's because people are spending time with their families, so they are not sitting in front of their computers blogging while the kiddos watch cartoons.  Who knows, but it is kind of a fun feeling being the only one around.

I thought that I could give you all a couple of updates on things going on around here.  I think I covered homeschooling the other day with the info about the long break, how about a picture of my hair, which I am still growing out and I think it looks pretty nice today. 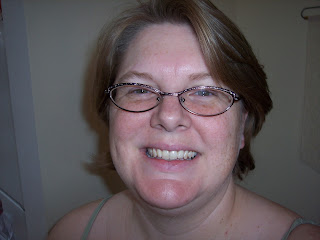 I haven't had it cut in months and I've been trying my best to put it up in ponytails :D
Hmmm, the next thing is probably Project 52.  I haven't forgotten about a commitment to spend time with my hubby, I just haven't been blogging.  Most weeks we have been asking each other the same questions from an article in Thrive magazine.  You can find the article and the questions here.﻿  It has been really great, because it's taken the pressure off performing for one another in regards to creating wonderful date nights and put the focus on each other and our lives.  We've even been able to go out into public with out our sweet little girl a time or two.  We are also hoping to do that quite a bit more often now.
We have started to pay off some debts.  We own our car now and we have finished paying off my undergraduate degree.  Now we are moving on to our credit cards and graduate degrees.  It's really tough to not take the money that was being used to pay for our past purchases and use them to accumulate more debt.  It's nice though being able to not worry about whether or not we will buy groceries that week, which was our life for a number of years.    If you are struggling with consumer debt and don't see a way out, I recommend Novadebt.  I am so thankful that God crossed our paths with them, because they helped us to create a plan and keep us accountable within it.  I'm sure that we would have defaulted on numerous things without them.  They have been a blessing since day one.
My brother and his wife are expecting their first child in March.  I'm very excited and easily distractable.  I have a few things made for him already, but need to get them in the mail!  I also want to do a smocked outfit for him, but haven't had the time or space to get started on it.  I guess technically I would also need the materials :D
I've finished Hannah's socks, started on socks for Joel which are not coming along quickly.  I've got a ton of work started on Hannah's quilt and very little on my own.  I'm hoping this winter will lend itself to working on both of them.  I'm also trying to gear myself up to finally get rid of the clutter that is infesting our garage, laundry room and office.  I've pretty much given up on attacking Hannah's room head on.  I go in when I have to and throw it all in the closet.  I wonder why I don't just get rid of all that, too.  Toys are overrated, right?
That's probably enough catching up for now, I'm going to head back into the land of cartoons and snacks.  See you soon!