December 15, 2010
The first time I ever met Joel's family was right after Christmas.  They live in Seattle and I was going through my adoration of Starbucks stage.  I would always order a grande breve latte.  It was divine and I had no idea that I was chugging down a pint of heavy cream.  We were at the local Starbucks and I saw the most adorable cup with a little Santa Bear that went with it.  The whole adorable thing came home with me.  And we started a tradition around the bear.  His name is Santa Bearista and he brings hot beverage fun-ness for Christmas. 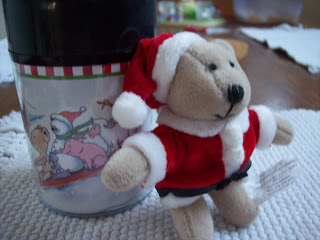 Isn't he adorable?  And the cup is still cute, ten years later.  Hannah immediately asked if she could use it when I brought it out to take a picture of it.

Santa Bearista has brought a large variety of beverages, including Alton Brown's Homemade Hot Cocoa Mix, tea sets, coffee's galore, and even an appliance or two.  He's a nice guy that Santa Bearista.

What kind of fun traditions do you have in your family?