What's in The Bible DVD 5 Israel Gets a King! 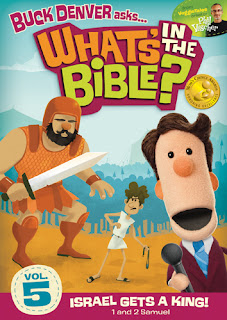 We love What's in the Bible? (WITB) with Buck Denver, man of news.  It's by far one of the best Christian based edutainment options out there.  We love it because the entire family can sit down and watch it together and laugh, as well as, learn.  I went to seminary, but I have always learn something new when I watch WITB.  It's great, but I think the laughter is the thing I love the most. 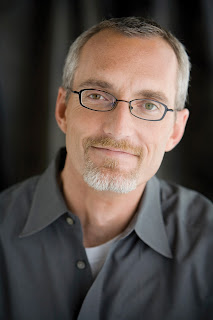 Phil Vischer, the guy who did Veggie Tales, is the creator of WITB, but after hearing his story, I think creator might be the wrong word, facilitator could be a better choice.  I am in awe of how honest Vischer is in regards to the depth that God reached down into him in order to bring this series into being.  I am also in awe of Tyndale and their dedication to the series and to teaching the world about the Bible.

Hannah's favorite part from Israel Gets a King, the latest in the series, is when King Saul and David fight in the popsicle theater.  Saul turns evil and oddly enough looks like Darth Vader including the light saber and David turns into a Luke Skywalker type character.  The two fight it out for a while and then David runs and runs.  She tells everyone she meets about that scene.  It made our entire family laugh out loud.

This video series can easily be incorporated into adult Bible studies.  It is simple enough to understand for children, but helps put the stories of our own childhood into perspective.  This series makes learning about the Bible enjoyable.  It's not just memorization but realization of what actually occurred.  I am looking forward to continuing to enjoy Israel Gets a King and all the other episodes that will accompany it in the future.


Now for the best part!!  As part of the WITB Street Team I didn't just receive a free copy to review, I also received a copy to give away!  Just leave a comment here during the next week and I will pick a winner at random on May 14th to receive the free copy of What's in the Bible? Israel Gets a King.