October 27, 2011
Hannah has been studying volcanoes for quite some time now.  She was particularly interested in Mt. St. Helens, because it is near where Joel grew up and I think because he remembers seeing the eruption all the way in Seattle. We've read books, watched documentaries, created our own volcano, and now, we have officially visited!

We went earlier this week.  It's the last week that they are open this year.  When we got there, the rangers told us how they couldn't see ten feet in front of them the day before and that they were expecting snow the next day.  You can imagine our delight when our view was this... 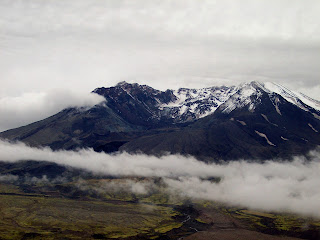 It was stunning and beautiful and not so cold that you couldn't stand outside and take pictures and take it all in. It was quite breathtaking when we went to an educational video and after the show, a curtain rose up giving a great view of the volcano.  Cool stuff.

We went with some extended family.  Here's a picture of our little family with our niece who is a year older than our Hannah... 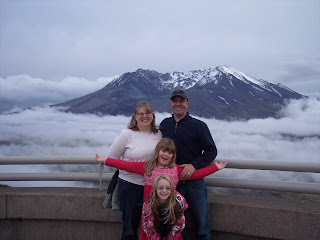 We also went to Ape Cave, which in one of the volcano's 2000 year old lava tubes.  When it's open, you can go all the way through, which is 2 1/4 miles.  It was closed when we were there, but you can tell it would have been dark and spooky, supposedly big foot lives in it! 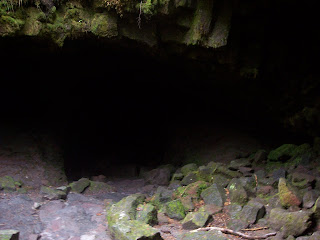 We also did some shopping in Seattle.  I think Hannah liked the cow at the shopping center best. 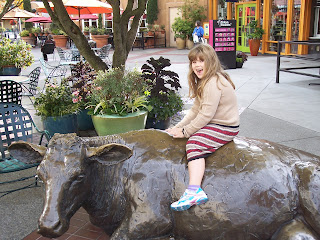 She's getting an American Girl Doll for Christmas from her Grammy, can you tell she's excited? 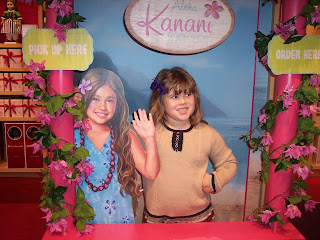 Hannah said that she plans on sleeping with her and giving her the magic baby bottle that she has.  Can you tell that my daughter is interested in using things for what they are and how they meet her needs and not how they are intended to be used?  I think there are American Doll collectors out there right now, trying to plot ways to remove the doll from our household just based on those two facts.  Not to mention that Hannah is planning on brushing her hair everyday and I can almost guarantee this doll with have some tats.

What have you been up to?