February 01, 2012
Yes, I know it's not Tuesday any more, but I like the sound of Tasty Tuesday and I really wanted to share this recipe with you all.

With three of us, we rarely eat an entire plate of biscuits.  I almost always cut the recipe in half, but last night, even with cutting the recipe in half, I still had a ton of biscuits left over.  I began to wonder if bread pudding was an option.  I did some googling and came up with this biscuit bread pudding from Homesick Texan.  I wanted to pin it, but Pinterest doesn't always recognize all the things I recognize.  So here are my photos and what I did in adapting it 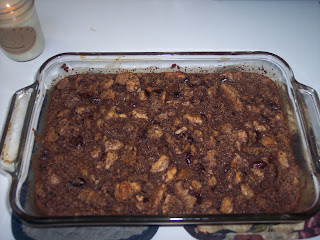 Doesn't that just look tasty?  It was, very tasty.  I liked it. 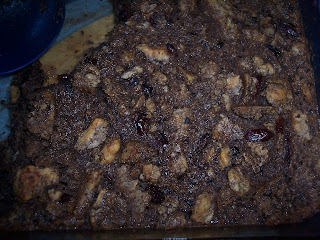 Here's a close up so you can see all the nummy fruit.

I greased the pan and then crumbled the biscuits in it.  Poured over two cups of milk and let it rest.  I then proceeded to beat two eggs and add a half cup each of brown and white sugar.  I also added cinnamon (which I would leave out if I were making chocolate again), vanilla, salt and cocoa powder.  Mixed all that up and then added it to the bread and milk in the pan, mixed it all up until it was pretty much the same color all over.  Added in some dried berry mix which is heavy on the cherries, but has bits of other things, too.  Cooked it in a 375 degree oven for just about 45 minutes.  We didn't let it cool long before digging in.  I had an extra bite with a bit of Sanders' caramel drizzled on top. I was able to teach Hannah the meaning of "Gilding the Lily" with that trick.

It think it's great for breakfast, snack or dessert.  Bread pudding is a great way to use up bread that would other wise go to waste, it's like the culinary version of reduce reuse recycle.