One of my favorite foods is pizza. Going low carb has not stopped my search for the perfect pizza, it's just changed it. At first, I was making cauliflower crusts. It was good, but almost as labor intensive as making regular pizza crust and because it had to cook in the oven and then be put back in to melt the cheese, it was tough figuring out how to work that in to baking our traditional crust.

When I found this recipe for coconut flour pizza crust, I decided to give it a try. Here are the things that I like about it: it's cheaper than cauliflower crust, it's easy, it cooks on the stove top and then put in the oven for cheese melting, and I can pick it up like traditional pizza. The one thing that I don't like it is, you have to put sauce and toppings all the way to the edge because the crust is a bit sweet if eaten by itself, but all the other positives more than make up for that one drawback. I made one for myself tonight, sour of the moment. I adore that aspect! 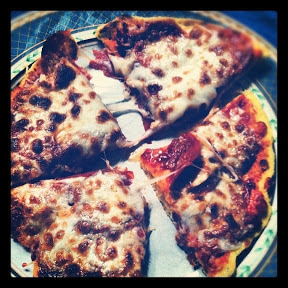 What tasty things have you had lately?