One of my favorite sandwiches growing up was a grilled cheese. As an adult, I enjoyed them even more. I would try different cheeses, different fats to fry them in. They are wonderful. But there is one major flaw for my low carb ways and that is the bread. Yes there is ,ow carb bread out there, but the ones I've tried aren't that much lower than regular bread and they taste funny.
Well, today, I was craving some of that gooey cheesy goodness. And one of my friends taking a nutrition class had mentioned we should eat more warm foods in the winter to work with the seasons and the likes. So the prospect of eating a chunk of cold cheese was not appealing when what I wanted was some gooey cheesy melts goodness.
Fortunately for me, my daughter ordered the flaming cheese at our local breakfast joint a few weeks back. It was so tasty, warm and gooey, but so melty that it really needed a dipping mechanism. I had a starting point though.

I took a chunk of mild cheddar and cut off about a quarter of an inch slice ( thicker could be used but thinner probably won't turn out the same). I placed in a nonstick skillet that was over medium to medium high heat. I let it cook without messing with it until I could see that it had started to melt and ooze out a bit. 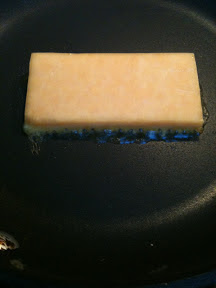 Now because this was a non stick skillet, I was able to get my non stick turner under it and flip it over, I could see that the cheese had not only melted, but developed a tasty looking crunchiness, too. 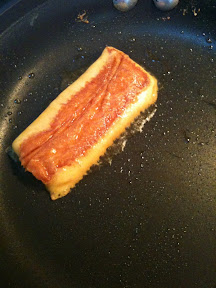 I let it cook for a bit longer until I could see that it had melted on the other side two. That point I served it on a plate with a fork and knife.

It was all that yummy goodness that I love about a grilled cheese without the carbs. It was so tasty, I just had to share.

What have you been cooking lately?