I swear to you, I thought today was Saturday. It feels a whole lot like one, which is probably why my brain said "Let's share something on the blog" Any way, it's not Saturday, it's Friday and I'm going to write anyway.

I had a retirement in my arsenal yesterday. It was a piece of luggage. Probably my first piece of luggage for plane travel. I got it in the mid to late nineties. It went to France with me as a carry-on. It has wheels and a telescoping handle, which were state of the art back then. I mean it was the age of the suitcase that tagged along behind you like a wagon, flopping over whenever it felt a disservice to its hard shelled pride. I'm pretty sure that France was one of its first trips. When I was flying back, with a bag full of wine and champagne and gifts, I fondly remember the steward telling me that if we were to put it in the overhead bin, it would give him a mal-du-dos or a bad back. It made me laugh as I buckled it in beside me on the little, hopper flight from Strasbourg to Paris, damn trains were on strike and couldn't be trusted with getting me there.

It's most recent adventure was a trip to Hawaii, before its current assignment. It was too heavy and too big to be considered carry on by Hawaiian Airlines, but in the bags defense, they have a 25 pound weight limit on all carry ons. So seriously who can make do with 25 pounds of stuff when going to Hawaii? Or come home with that? It's a money making scheme, I'm almost certain, because its the same weight on the plan regardless of where it's stored, right?

While on that trip, the zipper decided to got its separate way from the bag, I patched it up. It still has its pink inspection sticker from the kindly folks at the Maui airport looking for illegal fruits or something.

I brought it with me on this last trip, and truth be told, I've been gate checking my bags lately, getting them through security myself and then waiting until the airline said the fateful words "full flight" or even better "very full flight" and they give you for free what you pay 25 to 50 dollars for outside the waiting area. So I haven't been shoving that 90's carry on behemoth that meets the outer limits of acceptable, pushing the envelope for size and therefore weight, until this trip. It fit, barely, but I realized, I was going to to get a mal-du-dos if I persisted.

So I got a new carry-on, retiring my,old faithful. So many memories, so many wonderful trips. It's kind of hard to say goodbye, but the truth is that without saying fair well, I'm stopping myself from many more adventures with something new. With that in mind, I say, adieu. 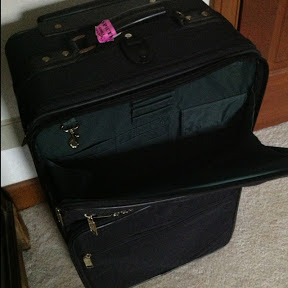