One of the very first people that Joel and I called to tell that we were getting married is our friend, Scott. It was funny, mainly because he didn't believe us. I think that's mainly because the last time that we had all been together, Joel and I weren't even dating. But that was thirteen years ago. A lot has happened since then. Joel and I got married, we've had a kid, taken and lost a couple jobs. And our friend, Scott, has been there for quite a bit of it. Including an infamous occasion involving me being pregnant, overly emotional, and lobster bisque.
But this weekend, we enter into new territory. Scott is getting married. We're very excited for him! This morning, Hannah asked if there was going to be a bacon cake at his wedding. When I asked, he seemed kind of bummed that there wasn't going to be one. So today, I'm working on fixing that. I'll let you know how that turns out! 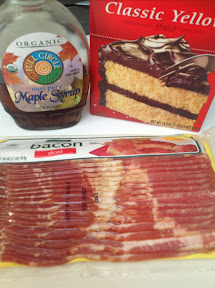