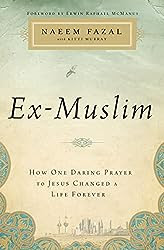 Ex-Muslim is the story of a young man who has met Jesus Christ. Now, this young man is a Pakistani that grew up in Kuwait and came to live in the United States in the early 90's. He was Muslim when he came to the United States. Not long after arriving, he encountered Jesus in a very real way, from that moment on, he knew that his life did not belong to himself but to Jesus Christ.
This book is quite simply a telling of who he was, his meeting with the living God and how God has been at work in his life.
There are several really powerful stories within this book, but my favorite is probably right at the beginning, when Fazal remembers praying to God, asking for an encounter with Jesus and ending his prayer with "whatever" or something of the likes. So often, we ask for things, but instead of believing that God will do something, we really have more of a sense of "whatever." We prove it by immediately going out and trying to make something happen instead of waiting on God. In regards to Fazal's "whatever" prayer, he didn't go out and try to make something happen. He didn't run out and start attending every church service available after praying for an encounter, he didn't join a monastery, no, he just continued to live his life. And God showed up at the exact right moment when Fazal would notice and be willing to see God for who He really is.
Overall, it's a pretty good book. I appreciated hearing his perspective on evangelism of those of Muslim faith. And I always enjoy hearing people's faith stories.


Disclosure of Material Connection: I received this book free from the publisher through the BookLook Bloggers