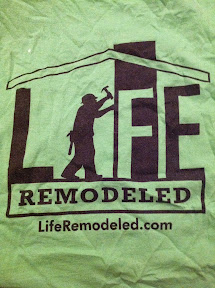 This past summer, Joel and I went down to Detroit and helped out with the organization Life Remodeled. They're going into neighborhoods and changing lives by cleaning up blight and connecting with people.
I like the shirt, I wear it when I clean, as can be witnessed by the little tiny bleach spot near the roofline above the L. I didn't know then how different our life would be today.

I'll start from the semi beginning. As many of you know, I have poly cystic ovary syndrome (PCOS). It basically means my hormones don't always produce eggs when they're supposed to and I can't rely on my period to set my clock. It's been in my mind one of the major reasons we've been unable to conceive for the past ten years. Yes, we started trying for another child almost immediately after Hannah was born.

For the past five years or so, I became so entrenched in the reality that we weren't getting pregnant that missing a period was no longer a cause to run out and by a pregnancy test. This summer, I missed my period in August and then September. I had scheduled a doctor's appointment for a well visit and did not want to pay for an office pregnancy test just for them to say "yup you're not pregnant." So I bought some from Amazon (you can get 25 tests for 7 bucks! Overkill I know, but it was cheaper than having one from the doctor).

You can imagine my surprise when my nonchalant "I'm taking this for proof that I'm not pregnant" lark came back positive! I haven't seen one of those in 11 years! I texted Joel, he called, I was apprehensive, he was excited. I had to take another test, just to be sure and then I read the instructions a few more times to make sure I was reading it right. Yup two tests with two definitive lines. I looked online, based on my last missed period, we were 11 weeks, almost done with the first trimester. I had had that headache and nausea in August, I guess it all made sense. We told people that very day, called all the relatives! We're having a baby!!

To be honest, I had lived with the "no" long enough that I wasn't sure if I wanted another baby. I consoled myself with the fact that they aren't babies forever. We were having another child, after ten years of waiting and hope being placed in other places, there was something we had wanted but I had forgotten. That was Thursday. On Friday, I started looking at baby sites and thinking about maternity clothes and wondering what stuff our baby would need.

That night, I went to bed and I was spotting a little, I didn't think much of it, because we were almost done with the first trimester. I woke up an hour later with a little more than spotting. That night I ended up bleeding quite a bit. I didn't know how a baby could survive such a thing but I knew that it was possible. I called the nurse the next morning, she told me to go to the er. Off we went and had blood taken, pee in cup, iv started, ultrasounds performed. Just to have the doctor say the only thing they could say for certain is that my blood work and ultrasound point to a four week pregnancy and not the loss of an 11 week pregnancy. She said it was possible for there still to be a child there, we just needed more blood work in a few days to know.

We left, I was crushed but hopeful. It was just painful being in the unknown. Not knowing whether to celebrate or mourn. I could hold out till Monday and the wait for the tests.

Monday I dutifully went in to see the new practice and have my blood drawn. They said I could call after eleven on Tuesday for the results. I was going to see people, people I care about and that care about me before I could call in. I decided that I'd share, even though all I really had to share was a possibility of hope. And that's exactly what everyone did, everyone hoped and prayed. We were all joyful in our hope. But as I drove home, towards that phone call, I just knew that that hope will have to be deferred. I just knew.

When I called the office, the doctor talked to me. He gave his condolences on our loss. And wanted to move quickly towards physical recovery so that we could start trying again.

There I was though, the holder of the news, the one who had so joyfully called all my family once again dialing numbers and not being able to say a word. We don't get to raise our child, the one the size of a poppy seed when prayers began in earnest for their life. So brief but so full of hope and faith. For ten years, we've waited, anticipating, never expecting that we would wait so long to have such a brief time together. Or to see so much joyfulness in hope. It's almost too much to bear the love that we experienced for our child in less than a week. God was extravagant with his faithfulness and it crushes me. It squeezes my heart to even think about how he would allow our child to receive so much prayer during their short life here. Not even two weeks from conception and we knew about this tiny life.

It doesn't happen that way. Things just aren't that beautiful in the midst of so much pain. It was God. Always reminding me that he cares, about the small things and the big. He reminds me that my days were written in his book before days even existed. He proves over and over again that He cares about how much hope I carry around with me.

I guess in the midst of this life being remodeled I need reminders that hope is important. And not just my hope but latching on to God's hope for me, our family, this world. Holding on to it and being joyful, because God has hope. He knows the end of the story so his hope definitely will not disappoint.