March 28, 2017
First off, let me just say that thinking back on it, I actually did not make this EXACT recipe. It's low fat! I'm a high-fat low-carb kind of gal. Low fat makes me cringe. So though I didn't make this exact chicken rollatini I can talk to you about what I did make and what I would do differently next time. Without further delay...Chicken Rollatini with Spinach Alla Parmigiana!

I don't have any prep pictures because I hate raw chicken. Actually, I hate raw chicken so much that I almost hate cooked chicken. I try to avoid its grossness. Lucky for you there are prep pictures in the recipe post if you're into that whole raw chicken thing that is. I found this recipe several years ago and it's sat languishing in my Pinterest feed ever since. The other day as I was looking through my Recipes to Try board I saw it and thought why not? 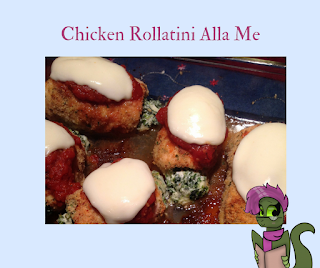 I bought all the stuff, put the chicken in the freezer to make it later in the week only to not take it out in time and have to go out and buy more chicken, but hey, it was cheaper than going out to eat! So the recipe itself was easy enough once I had chicken that wasn't a brick. I think instead of just buying thin cut breasts I would pound them a little next time. The rolling part was a little easier than I anticipated. I mean they really stuck together and held their own. I did use whole eggs instead of egg whites for the egg dip. Next time I'll probably use straight up butter because fat is good for you! Oh, I wonder if olive oil would work? Note to self: try olive oil next time instead of butter, because olive fat is better for you than milk solids... 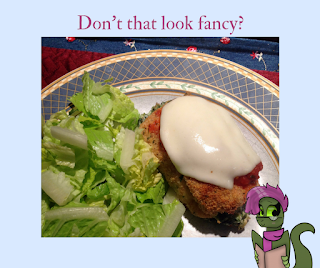 So I made them up, used some leftover pizza sauce from the Sicilian Pizza we had the day before. Plopped down some fresh mozzarella,back in the oven to melt and dinner was done! Overall, it wasn't bad, but it was low fat and because of that I felt like something was missing. I will try it again. Until then, it's been bumped to the Meh pile. 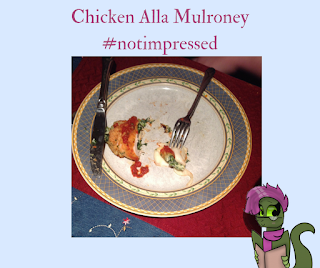 PS The kid didn't like it much at all, but that doesn't mean I'm giving up. The rule of thumb is that you have to try something three separate times before you discover you like it.