March 21, 2017
When I was a little girl, I LOVED pizza! I still do actually. But being mostly low-carb, I've not found that I like many of the low carb options and even worse, the normal high carb options no longer taste good! There should be a law against such things!! Anyway, as a little girl we would either go to Pizza Hut and get a deep dish pizza or on a rare occasion, we would make a deep dish at home using a Bisquick dough (Bisquick was always in our home). So, enter the Sicilian Pizza with Pepperoni and Spicy Tomato Sauce and I am in heaven! No, it's not low carb, yes it is delicious! Worth every single bite.

Okay, but in true HoHa disclaimer* fashion, the day we made it most recently almost became the day of three dinners. Joel started making the dough. 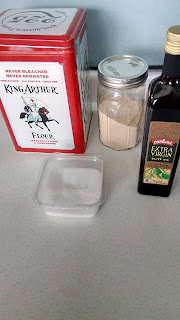 Seriously, it's just five ingredients: flour, yeast, salt, olive oil, and water. NOTHING to be afraid of. In the mixing bowl everything went. They get mixed up until it pulls away from the sides but sticks to the bottom.

That's when things got a little "oh man!" Even though we have made this recipe several times, when we looked again, we realised that it has to rest for 12 to 24 hours after this point. Thus ends the making of dinner one which wouldn't be eaten until the next day. It had to rest, I guess all that spinning in the mixer wore it out. 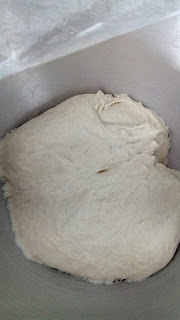 Enter day two. I just love sticking my finger in a risen bowl of dough. Cannot help myself. 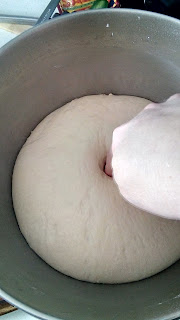 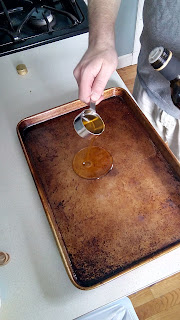 Yes, that's a quarter cup of olive oil, do it! Oil is your friend!! We put the dough in and stretched it out. Let it rest, while I made the spicy tomato sauce. 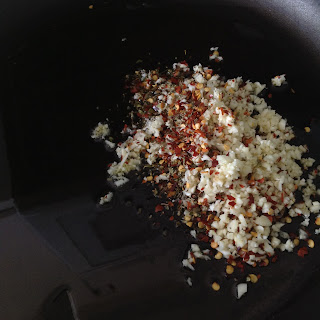 In case you were wondering, that's what nine cloves of garlic look like all chopped up. OMNOMNOM! I love the smell of garlic! 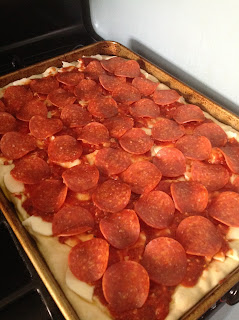 This is where this pizza gets a little crazy, it goes olive oil, dough, cheese, sauce, pepperoni. BUT... 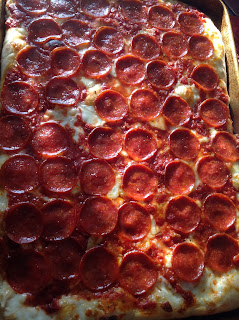 then it goes full on omonomariffic at the table. This recipe gets a 15 out of 10. It's great to eat straing out the oven, cold or reheated day after, even two days after (if it lasts that long). Go and make it yourself, tell me how you like it!

Special thanks to Joel for letting me harass him with my camera phone while he was making this.

*HoHa disclaimer-I practice Hands-on Home arts (HoHa for short). I'm not here to make you think our life is perfect, but to show you that life can be fun. So this day, we put the dough aside for the next day and I decided to make split pea soup with ham for dinner that night. Even though I have the WORST luck with dried beans and it turned out that it was a crockpot recipe, we went ahead with it. At dinner time, the peas were just barely crunchy any more and we were saved from having to make a THIRD dinner in the same day. If you follow me on instagram, this was the biscuit day. I had to make something that was going to be delicious and edible in the same day!