I'm almost positive that you've been reading all the hustle talk out there. I think it's the modern day equivalent to "Get it, Girl!" I'm here today to let you know that I didn't hustle today. I'm pretty sure that I didn't hustle yesterday and the chances of hustling tomorrow are looking pretty slim. And guess what, life is good.

Don't get me wrong, I've read the books, I've listened to the motivational speakers and they are all telling you how to run your business and life. They are saying that they key is to be omnipresent. More reliable than Jesus is what appears to be the goal in most cases. There is no sense of taking a day off. There's no remembering of the story about the Oregon Trail teams. Have you heard that story? I can't verify the truth of it, except that I've seen it play out in my personal life.

Once there was a large group heading out on the Oregon trail. They had enough supplies and provisions to get theme through the pass but half of the group was concerned that their supplies wouldn't hold out and so their plan was to not take any rest days but to push through until they got there. The idea being they would be on the trail fewer days and could restock and rest when they got to the other side of the pass. The other team decided to continue to regular rest days and just trust that what they had was enough. Guess which one came out okay? The group that decided to hustle over the pass or the one that decided that rest was an integral part of the journey? According to the story, the group that rested didn't lose a single soul in their passage and all of their livestock remained healthy and ready for the coming winter. The hustle group, no so much. They lost all their livestock and several of their party.

I think the Hare is trying to re-write our stories. The lie that we can do more and be more in order to be enough is very prevalent today. It's out there in all those motivational images and talks, telling you that if you just worked hard in the right places and hustled a little more then you'd be enough. You'd be rich and people would be buying things from you or wanting to be your friend or lining you up for the next big promotion. It's lies. There's never enough hustle. Slow and steady does win the race.

Now I know that some of you that might be reading this are natural born hustlers and I don't think there's a damn thing wrong with that. You are part of what makes this world amazing! I love hustlers that come by it naturally. I think that runners should get out there and run. But I also think that there are those of us that are going to build successful lives in completely different ways than hustle. I mean, seriously, you can't be hustling when it comes to dawdling three-year-olds. You just have to give up your personal timeline, slow down, and stoop to see the dandelions again for the first time. And guess what, no friend likes to feel the hustle when we're having lunch together for the first time in months. Slow down! We don't need you to hustle, we just need you. 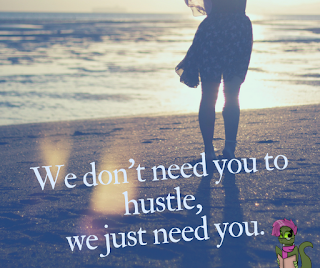 So, I'm here, rambling on to remind you that hustle isn't always the answer. Sometimes, you just have to stop and be you. Get some rest, enjoy the things you're working so hard to achieve, and be yourself.