May 01, 2017
I don't know where I read this but it was somewhere on the internet and it basically said When you get tired, learn how to rest instead of quit. Turns out it's attributed to a graffiti artist in England. 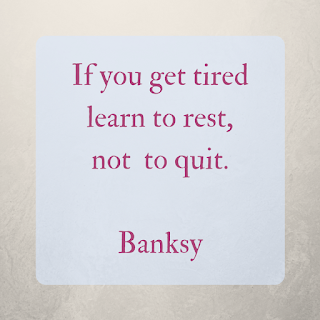 This is totally what I'm trying to learn right now. I sometimes take a while longer to recover from interactions that I would like. Especially if there is mental work involved. I've talked several times before that I've suffered from clinical depression, well it feels as I get older that my bout of Lyme Disease is also making things deteriorate faster than I would like. I don't always remember exactly when I want to, sometimes I stop mid-sentence because I don't remember what I was saying. And yes, these are all parts of getting old, but when it's just part of getting old, you don't really notice and you don't really care. Me, on the other hand, I do notice and I do care, it's much too early to be losing my mind. I find that I do better when I spend less time with people and more time resting, which is a terrible thing to accept at the age of 41. And it's not that I start things and then forget that I was doing them, I start to say things and the words that I know that I should know are just not there at the moment. They eventually show back up, but it's often long after the conversation has passed.
For the time being, writing doesn't seem to be near as affected as random conversations, but still, there's a thought that it might. And I guess I should say that I'm not even sure if anyone outside of my immediate family and myself notice these little hiccups. It's not glaring, at least I don't think they are. But sometimes they wear on me. I used to love wordsmithing in conversation and now it's sometimes a struggle to remember simple parts of a conversation.

So for now, instead of quitting life, I'm learning how to rest and figuring out how much rest is needed and learning to be okay with afternoon naps especially after people-centered seasons of life. Are there things in your life that you'd like to quit but you should learn how to rest instead?