It's not nailed down, you know. 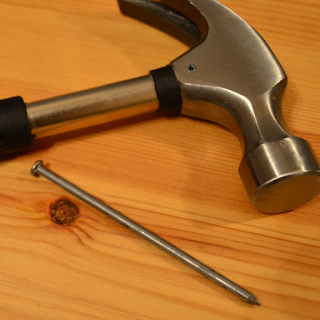 Sometimes, I think we like to believe that the stuff in our house is nailed down and permanently married to the place we've set it. Well, the food goes there, the table is set over there, the couch has to face that wall. I think we've done the exact opposite. People have commented about our rearranging over the years, taking notice when things are moved and replaced.

Most recently, I've decided to take on my notions of the cabinets in the kitchen. Y'all may know that I fell in love with a clean countertop a few years back. The look it gives even a simple kitchen like ours is worth the effort to make it happen. Recently, EVERYTHING was put on the countertops. I was trying my best to accommodate the desires of my whole family and we gained a few appliances that are countertop dwellers that are way too big for a cabinet home. That didn't explain why all the other ones had moved out but it's where we found ourselves.

The problem with have appliances on the countertop is that they act as camouflage. You set a few small things next to them and they kind of disappear from the tidy up list when it's time to clean up. Next thing you know, your entire counter is full of small things that are in very close proximity to the few large things that you said could be there. In some ways reminds me of these fish who hang close to the diver so they don't get eaten. Well, a few days back, I finally voiced my lack of stuff on the counter love and Joel agreed. The problem was that he also didn't like having the appliances in a separate room (ahem, basement, I think he was talking about our love affair). I decided to try something new.

This past Monday, I moved all the appliances and glass cookware and all the hoopla out of a cabinet and put the food in there. I then put all the hoopla into what has traditionally been the food pantry. I did keep a few food items in there, mainly baking. But it all fit. All the things on the counter plus the stuff in the cabinet AND a box of snack food that used to live on the floor have all found a new home. And the food fits in the cabinet they used to live in. So even though I did a bit of wandering, opening doors last night and wondering what it was that I was looking for while I was making dinner. I think it's going to work for us. And if it doesn't it can always be put back where it was before.

The reason I share this is that it's good to remember that our homes aren't nailed down. They are not set it and forget it. They're supposed to work for our needs. And if they aren't then do something about it! And I'm not talking about blowing down walls. I'm a firm believer that if people have lived in a house before then the space as it stands is livable, you just have to learn how to use it. And part of learning that use is learning the limits of the space and then adapting within those limits. For the kitchen this time, I had an idea that that closet was meant for food but the reality is it's much better suited for our appliances and cookware. What area of your home could you reimagine?