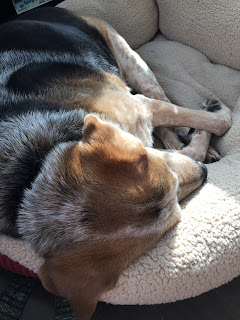 I know that it’s been over a month now. I feel like I shouldn’t find myself randomly crying as I vacuum the living room or as I wake up in the morning but I still do. It doesn’t seem like quite enough to say that she was a good dog. She became so much more than that and I don’t know if I recognized it until she was gone.

We moved into our home in the summer before our daughter’s tenth birthday. She had asked for a dog ever since she could string together more than three words. We were habitual renters, we could play off the request on our landlords and say they wouldn’t allow it. But once we had our own place, the time came to make good on her request. We looked at several different dogs, but it was clear that Mindy was the right one for use. She was older but that also meant that she was calmer and content to hang out in the house and just be. She didn’t play, unless you called yelling at the cat most evenings play, but she happily took pets and occasionally, she would run in the backyard like a puppy high on peanut butter. Those first few months of dog ownership were fun and a shaking out period for all of us.

In October of that year, I remember that I had my annual physical scheduled and I hadn’t had a period since we moved into the new house. I didn’t think much of it because I had been irregular before and we’d been trying to get pregnant again for so long that I had grown numb to the idea of even having more children. I ordered some of those super cheap pregnancy tests online just so they wouldn’t charge me an arm and a leg when I got to the doctor’s office. You know what I’m talking about, they ask when your last period was and then if it’s far enough back they’ll ask if you’re pregnant. When you don’t know and you’re irregular, they make you pee in a cup. I wanted to be able to tell them that I for sure wasn’t pregnant because I was opposed to peeing in a cup for money. When the tests came in, I set them in the bathroom, knowing they would be negative. When I finally had to go, the test showed positive. A very distinct positive. I figured there was something wrong with the test. I didn’t know that false positives weren’t a thing. Of course, false negatives are but basically if it’s positive, it’s positive. I took another test. I called my husband. I was all the emotions. Well, all the emotions except happy. I didn’t want more children.

The next few months were a whirlwind. We lost our baby two days after the positive pregnancy test. It was just enough time for us to excitedly tell all of our family that we were finally expecting our second child. I was cramping that Friday night and spent the night back and forth between our bed and the bathroom. I didn’t know if a pregnancy could survive something as gruesome as what I was going through but I prayed for that little baby. The next morning, I got up and called the nurse hotline, then my dad to come over and hang out with Hannah. The emergency room got the same positive pregnancy test that I did but there was nothing on the ultrasound. My womb was empty. They said they couldn’t know for sure, I’d have to get my blood tested again in a few days to see if the hormones had gone up or down. When we got the final word, our doctor was very encouraging that we could get pregnant again. He was right, within two months we were pregnant with our third child.

That’s what we did together, we walked. It was easy to be with her, she didn't ask about our babies. She never wanted to know when that residual bump was due. She never wanted to talk about life, she just wanted to go out and fell the wind in her ears and shake her tale, maybe bark at the UPS man face to face. She and I would go out regardless of the weather, except for rain, neither of us did the rain. But we did the brutal cold, the snowy afternoons, the humid evenings, the days when the sun was so bright off the snow you thought you must have found yourself on another planet. She became one of my constants. I knew that she would be up for a walk any day at any time. She even tried running with me but found that she liked pooping in other people’s yard more than just running by in a flash.

Near the end, when the cancer had begun to win, she still wanted to go but her poor body wouldn’t let her go very far or for very long. She was constant until she was no more. And it breaks my heart every time that I think of her because of how much she gave and continues to give. So to say that she was a good dog just doesn’t feel like quite enough. She continues to give and continues to provide a warm spot for me even though she’s not here to thank her for it. And maybe that’s what I really miss is letting her know how grateful I am that she saw me through.