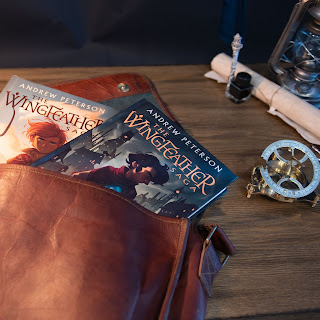 Have you ever showed up late for a party? I know that sometimes it can be awkward like you missed the cake and people are already starting to wander their way to the door. But sometimes, you get welcomed in and it's like the party has been waiting for you to just get itself going. I was late to the Wingfeather Saga from Andrew Peterson, but it feels like the party has been waiting for me and for you to show up! And they've put on new party clothes to mark the occasion.

The Wingfeather Saga is the story of three young children that are heirs to the throne of the country Anniera that has been ransacked by an evil ruler who is determined to capture them as well. We meet Janner, Tink and Leeli in the first book of the series On the Edge of the Dark Sea of Darkness, where they are just a small family living in the countryside of Skree and the land of Anniera is a fairy tale at best. Gnag the Nameless has taken over this land and is using Fangs to search for the children. The children are discovered and unexpectedly find themselves fleeing for their lives. They are not alone, their mother, grandfather, crazy uncle, and the faithful family dog are there to help them navigate the way. The first book is in someways an introduction to the action of book two North! Or Be Eaten.

North! Or Be Eaten seamlessly picks up the story of book one without a lot of retelling to weigh the story down. It's just enough in all the right places to remind of the things you may have forgotten since you read book one and to allow a new reader to pick up the story independently without too much confusion. The story of North! is the family's journey to the Ice Prairies, where they will hopefully escape the Fangs and Gnag the Nameless.

The family encounters several adventures along the way. Janner and Tink get separated from the family. Janner's journey is the focus of the story, showing us the life of children in Skree and the culture of those that live in the countryside.

These two books are the first of the re-release as hardcovers with illustrations. Even in the kindle version, the illustrations make the story richer and vibrant. The fantasy is well told, with enough that's different from the every day but also not so far fetched that the reader can't connect with the ideas. The stories aren't too scary for younger chapter book readers but adventurous enough that a parent reading along will keep their interest. I personally finished the second and sought out the third and fourth books so I could find out how the story ends.

If you're late to the party, come join us! This is a story that you and your children and children's children will enjoy for years to come.


Copies of books one and two were given to me by Waterbrook Multnomah for the purpose of review. I'm not required to write positive reviews but I'm always thankful when I can!