June 29, 2010
We had VBS at the church last week and the week before that was pretty much prep for VBS and this week, the one we're all in right now, well, it's pretty much recovery :D


We have started something called "Tuesday Bee" at the church on Tuesdays.  Just a time to come together and work on any project that you may have or just to drop in and chat.  Today, there were five of us.  I got a chance to pick my smocking project up again, which I haven't done in ages and I actually was able to finish the smocking today! 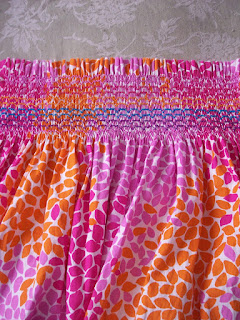 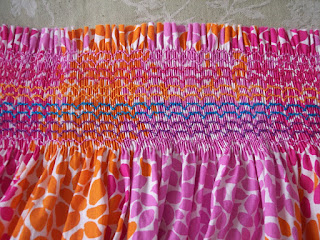 After finishing up the smocking, I wish that I had used some more of the contrasting colors, because the others just blend right in.  I called around today and found a place to buy some elastic thread and exactly where it is located in the store.  I'm really hopeful that Hannah will be able to wear it for the Fourth of July.
I'm hoping to be around more often than the past two months.  Our computer is trying it's best to die.  When we rearranged our bedroom, it decided that it needs to be coaxed to turn on.  So I have to turn it on and off about ten times before it actually turns on for real.  I would love for it to make it another year, but we'll see :D