What's In The Bible? DVD review

July 28, 2010
I'm pretty sure that you have heard of the Veggie Tales by this point in your life.  A tomato and a cucumber that do amazing things considering they do not have hands.  They are even on Saturday morning cartoons now if you want to check them out.  Well, their creator, Phil Vischer, has done something even more amazing... 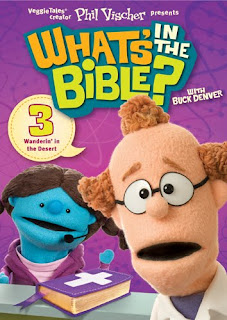 I received the third in the set of this DVD series for review from Tyndale House Publishers.  We also received a screener's copy of the first in the series.  In the screener's disk, Phil Vischer gives a wonderful testimony about what happened with Veggie Tales and how What's in the Bible? came into being.  The plan is that the series will cover every book in the Bible.  The first three have covered the first five books of the Bible or the Pentateuch.
Wanderin' in the Desert

is the title of the third DVD, it contains two episodes on Leviticus, Numbers and Deuteronomy.  Having studied the Bible before, I thought that this would probably be fluff information about this often times boring bit of scripture.  I was wrong.  Jelly Telly team do an excellent job of not only stating what's in the Bible but also make it interesting and thought provoking.  Each time I sat down to watch the videos, either on my own or with Hannah or Joel, I laughed and I learned (yes, me with a M.Div. learned from a kids show!)  What's in the Bible? as a series is comical and enjoyable.  The characters are memorable and reminiscent of The Muppet Show.  It can be a little fast passed and mind boggling at times, but over all, it is a great resource.  I am looking forward to the rest of the series.
We have been studying Genesis in our homeschool adventures and the Genesis episodes fit right in with our lessons. It helped round out information that we have already discussed and it broadened our exposure of information.  Hannah specifically asked if we could watch it one day so that she could learn about the "40 year time out" which is the way that Numbers is described in the series.
If you would like more information on the What's in the Bible? series, visit their website by clicking here.