February 15, 2011
Since we moved into our current home and started weeding out the wee one toys that Hannah no longer needs, they have been sitting in various places in our house.  Let's see, they were in Hannah's room for a long time, and then they went to my laundry room, a little time in the spare room and then they started to habitat in the garage.  They've been there for a little while and I've been so concerned about what to do with them.  Well, Purple Heart called and they take toys.  I put out an entire porchful of stuff and then it was gone.  Just like that.  Boxes of stuff that I will never have to think about or move around or ponder again.  Kind of feels nice.  I think I might have to do it again, and call them instead of waiting for them to give me a call.


During the same weekend that I realized a place to give my stuff, I finished a project that took much longer than I expected.  I started about a year ago, while visiting Seattle.  I bought these really great short needles, because the ones I had were just a little too long.  Turns out the ones I purchased were a little too short.  It took forever and then there was a lot of deep sighing and frustration as I tried to shape the gusset.  I put it aside and got some needles in between the two lengths I already owned.  They worked great.  I really enjoy them.  And I was able to finish the first sock and start and finish the second sock within a month and half.  I completed them on Sunday night and my sweetheart was able to wear them on Valentine's Day as a special treat. 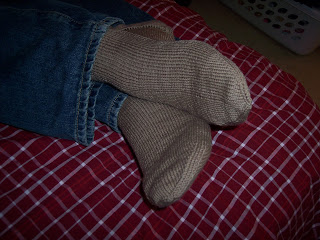 My mom is in town right now! She, Hannah and I went and got our nails done today. 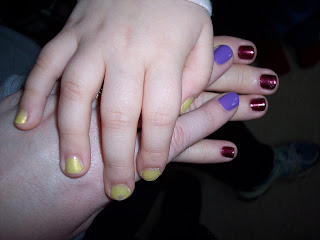 Hannah picked yellow, I landed on purple and mom choose a burgundy color.  It was great if you ever need your nails done, go to Wonder Nails on Plymouth in Livonia.
Tomorrow I get to do one of my favorite things, prepare a meal for a big group of people!  Wish me luck!