Hi! It has been a busy week for me. Hannah went off to camp last weekend and we picked her up yesterday. It sounds like she had a great week. She went horseback riding, they visited the Detroit Zoo, she did a 500 ft zip line, they sang songs, ate marshmallows, the food was good, and she was excited about going back again next year.
Joel and I had our own week at home. He took a couple of half days, we watched movies together, went out to eat, I went shopping, we visited the library, hung out and had a lot of fun. It was a good week and I'm excited about doing it again next year :-)

I gave a testimony at our weekly campfire this past Wednesday, too. I talked about how I'm Joel and Hannah's cheerleader. And I realized that being an introverted cheerleader is tough stuff. Mainly because I want everyone to like me, but I don't have enough energy to be the best me all the time. And so I have to be okay with some people judging me based on things that I can't change. I realized that in all actuality, I might just be okay with people not liking me when I'm not rooting for their team. I have to keep the home team inspired and if the opposition to that doesn't like it then so be it.

I also did a couple of projects while Hannah was gone. The main one being recovering our dining room chairs. We use them every day. I had some fabric that I had picked up earlier this year and I borrowed a staple gun from the church, so it was a low stress kind of project.
The chairs are part of a whole dining room set is from the 1920's that includes a china cabinet, a buffet, the table and the six chairs, including a captains chair. The captains chair did not get redone the last time I did them about six years ago. It was in rough shape, here's a picture 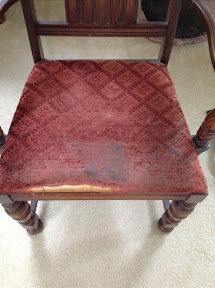 The fabric is original and you can see that it has pretty much fallen apart. I would tell you how I did it, but honestly, it's the pretty standard upholstery stuff you find all over the Internet and television, no need to rehash something I don't do professionally.

Anyway, here's the after! 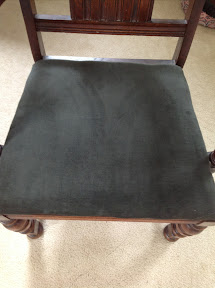 The fabric is a pinwale corduroy. I'm not sure how it's going to stand up, but it looks great for the moment. It has really changed the whole look of the set and the dining room as well.

That's what I've been up to. What about you?