March 07, 2014
Yesterday was one of those days that kind of stretched on forever. I think making waffles for breakfast can do that to a day. I don't make waffles everyday, but on Thursdays specifically, I try to make something special for the family. It's the day that Joel writes his Sunday sermon, so I like to send him off well fed. I don't always succeed, but it's a hope for every Thursday.
Well, after waffles the day just kept getting better. I got to Skype with my sweet Momma, my dad has a contract on his house, we went to the dollar store with no meltdowns, AND we got a good parking spot at the library.
Something I learned this week, sometimes it's easier to just buy the four dollar slice of cake. You see, Hannah wanted a slice of vanilla cake from the store for her Saturday morning treat. I couldn't bear the thought of buying such a small amount of cake for such a big price tag. I agreed to make one.
Well, she didn't just want a single layer, she wanted a layer cake with cream and jam in the middle. So yesterday, after I started the dishwasher in the late afternoon, I began. I made: a cream pie filling (would probably use a different recipe next time); 1-2-3 cake in two rounds (next time I'll measure them so that one isn't done before the other); opened a jar of strawberry jam; and made some frosting. It definitely cost less, took very little time in the scheme of my day, but now, I have all this cake! 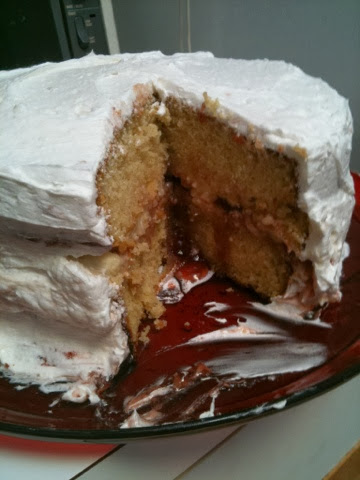