The Unschooling Daughter and the Straight-A Momma 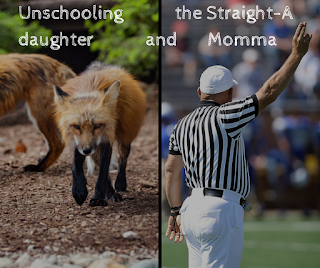 I haven't shared much about our homeschooling lately. To be honest, my daughter is pretty independent most days. I try to help her with things but she's at a point where she's figuring a lot of stuff out on her own. We still converse, I try to get as much information as I can into our conversations and will follow them up with links to articles or youtube videos. So there isn't really much to share in regards to actual school work.

I have been thinking today about that transition that I had to make when we first got started. I was one of those people that loved school. I tried my best to have perfect attendance, straight A's, and turn all my work in on time. I did my homework the night before, unless I completely forgot about it, like that report for Mr. Prospero about Will Rogers which I totally just biffed and wrote it the morning of while I was walking between classes. Let's just say that was the last time I forgot to go to the library for his class. It continued through college. I can count on two fingers the number of times I skipped class, one was to wash horses with Mary Ladd, the other was the watch the infinity dress commercial with Jaime. Both were totally worth it and I'd do it again. Now, graduate school I struggled a bit more. Things weren't as rigorous as I was used to and I met those expectations quite well. It probably wasn't my school's fault, I had just completed a dual major and practically showed up straight from my summer job as a camp director and was taken down by cedar fever, which I have never experienced before or since. All that is to say that I am a lover of rules. I really enjoyed the structure of school and the regiment of classwork, papers, labs, and the academic life in general. I still toy with the idea of going back to school but since I don't have any actual need or reason it's just a happy little daydream. (It normally involves medical school). That's me and my academic hang-ups.
Before Joel and I even got married, we had pretty much settled on the idea that we would homeschool. Between the two of us, we have degrees in chemistry, English, French, and divinity, so we thought we'd be okay. I had plans to do these amazing labs in our high school years and that we would have a sweet little school room set up in our imaginary house in the future with all of our kids gathered around to do school work just like in Little House on the Prairie, the tv show not the books.

And then reality happened. We didn't have lots of kids we had a kid. And as much as I wanted her to be able to sit and hear all the amazing lectures and watch me be the teacher at the front of the room, she was not thriving. It was a struggle. The worst part was that she was learning more about what I wanted her to learn through her own play and personal entertainment choices. I mean seriously, here was the kid that wouldn't sit through a lesson but could sight identify over a hundred different species of dinosaurs and interject into conversation animal facts that were not only correct but relevant.

I had to come to terms with the fact that even at that early stage of her life, her need for me to educate her was very low. She did not need lectures and workbooks and any number of other things I had tried. Fortunately, I wised up and started checking to see if things were in the library before investing. Unschooling was a natural choice for H. She was doing it already. She was feeding herself information and learning how to gather more of it all by herself. And there I was trying to ask her to do the equivalent of using a fork and knife on a chicken tender and ear of corn when she was perfectly content eating with her own two hands. I had to let go of the how she got the knowledge and accept the fact that she was getting it. Even today I struggle with this. I wonder if she's getting well-rounded meals and if I should be inserting my etiquette into that ordeal.

I have discovered that it's best to help her decide what's on the menu, give some helpful suggestions on how to serve it and then let her have at it. It never ends well when I try to force feed her or make changes. That's not to say that I don't have access to the menu. I do. The two of us sit down on a regular basis and decide how she's going to get different aspects of her education into her day. I'm there for questions and for challenging. At the moment, I'm also the record keeper, though I imagine that once she gets serious about what's the first step in her completely independent life that she will move into that role and some other advisor will help with her educational menu making.

I read other homeschool families doing, getting new curriculum, buying school supplies, a start and stop to the school year and there's a temptation to feel like we've missed out on something. And in truth, we have, but what we've gained has been far greater than any loss perceived or real. I wouldn't say that unschooling is for everyone, just like I wouldn't say that homeschooling is for everyone. What I have come to accept is that unschooling is perfect for us today. There may come a time when our daughter has a change in her learning style and she will thrive in a traditional educational setting until then we're going to keep on. And I'm going to do my best to not worry about the lack of grades and attendance.