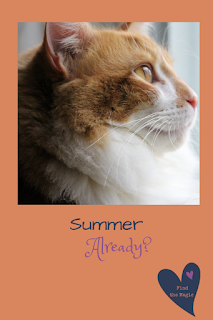 It's been a long late winter-spring this year. In addition to the weather staying cool for some time, we were dealing with stay at home orders from March to June with a few weeks of personal isolation due to Covid exposure prior to the state orders. I think it was an exceptionally weird time because right at the beginning of all the news stories talking about this new virus, we had a positive pregnancy test. I had some light bleeding around week 6 but everything seemed fine. When I went in for the 12-week ultrasound there was no baby to be found. We must have miscarried at week 6, but I was measuring normal at week 10, which turns out was because of fibroids. When I talked to the doctor over the phone about family history, we agreed that I should get a biopsy but haven't been able to because of restrictions on office visits. Talk about a crazy few months.
The weather finally decided to turn warm in Michigan, the governor stopped telling us to stay inside, and now it's starting to get blisteringly hot. And life still isn't normal. We've been doing projects or I should say paying people to do projects around the house that have been on our to-do list since we first moved in. Some small, some big, all needed. One was getting the trees trimmed. If you've ever lived with mature trees maybe you've experienced what I'm about to describe.
There were some trees that had some obvious dead pieces in them that needed to be removed. Beyond that, they didn't really need much change. But there were some other trees that were close to the house but appeared to be rather healthy. I thought they'd remove a few branches around the house and call it a day. But those trees, the ones that to me seemed to be in a place where they didn't need much work were the ones that got the most removed. Going outside and taking a look when they were done, it was as if a ceiling had been lifted and there was more room to breathe. It invited a deep breath, not one that you hold, but one that you easily release.
It's been hard though, even though it has been beautiful and the new is what's best, it's still taking some getting used to. And that same sentiment is true for other areas of my life. After dealing with our third miscarriage, it was time to let go of the idea of having more children biologically. Not that we couldn't have pushed on, but it was clear that it was time to let go. And it's a lot like those trees being trimmed, there are places that clearly needed to be mended but there are also those that once they're gone, you can see something you couldn't see before. I'm still working on what that something might be, I'm don't always have perfect sight, but with time, things often become clear.